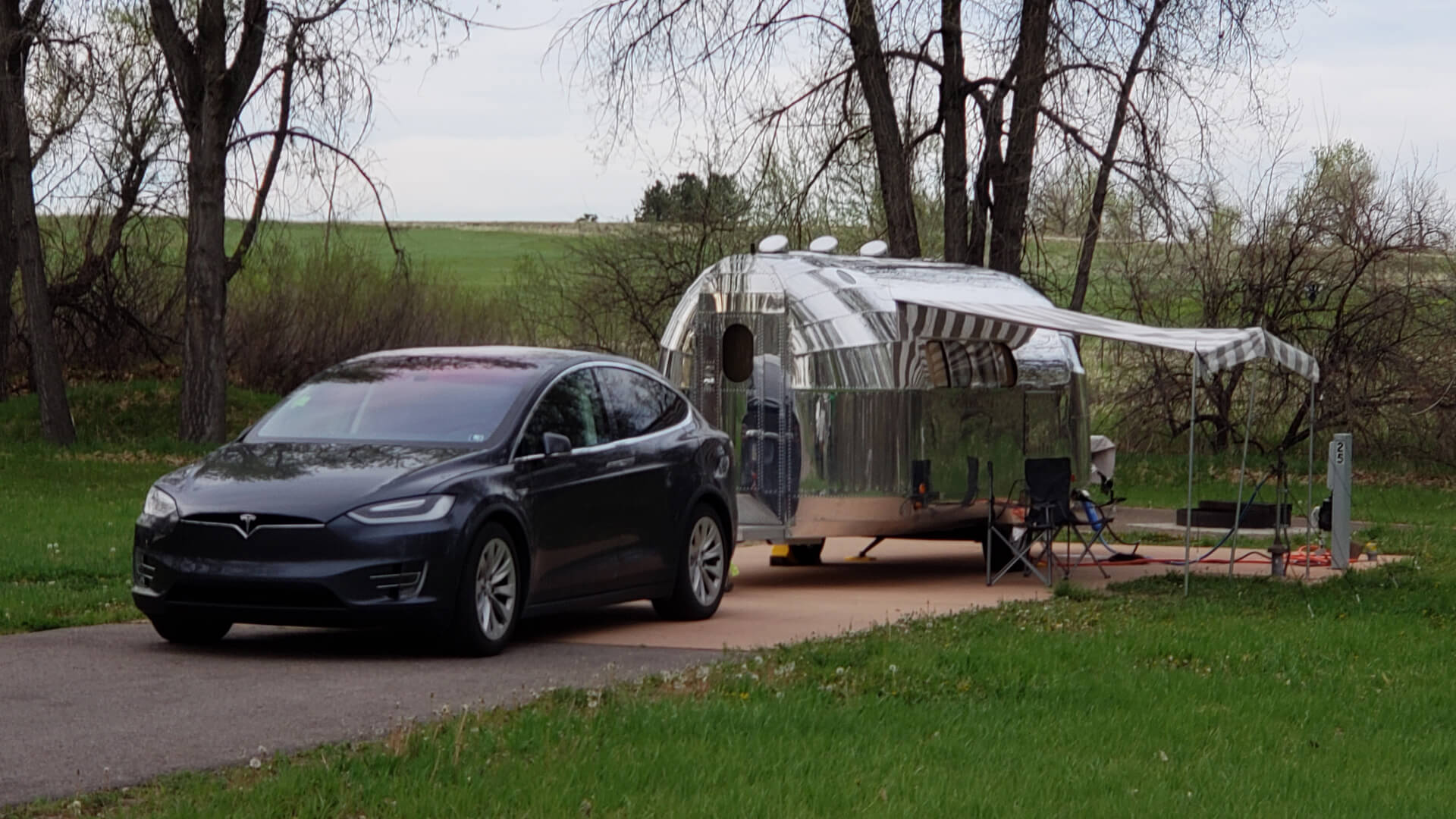 Electric SUVs and the Bowlus Road Chief: A Perfect Pairing

The Bowlus Road Chief is the best adventure partner for a EV for a number of reasons. One of our favorites? Three words: emission free camping.

A Tesla X towing a Road Chief gets up to 200 miles per charge. There’s no other electric duo that comes close (vehicles of comparable length and weight don’t even make it past the 50 to 95 mile range). The Bowlus Road Chief, after all, has its roots in aircraft construction. Its ultralight weight is yet another feature that makes it the ideal companion for a EV, which weighs twice as much as the Road Chief. The result? A highly stable towing experience at 65 mph.

That ultralight weight also streamlines the charging process. In the event that a EV charging station doesn’t have space for your Road Chief, you’ll have to park it in an adjacent parking spot. With most trailers this would be a hassle; but the Road Chief can be hitched or unhitched in under a minute and moved by one person. The Road Chief’s streamlined profile means it’s narrow enough to be pulled behind your Tesla without extension mirrors, which can also detract from your range. The handling is unparalleled: you can cross narrow bridges and find parking options with ease.

You can even charge your vehicles at pull-through campsites. One of our owners recommends opting for sites with 50A service in order to plug the Road Chief into the 120V outlet and the Model X into the 240V with the current set to 28A or less. That being said, even a 30A 120V site works well with a Road Chief and EV. One thing’s certain: zero emission camping with a EV/Road Chief duo is simple and easy. Sleep well (in your Road Chief's luxurious bedding) knowing that you’re leading a camping revolution. 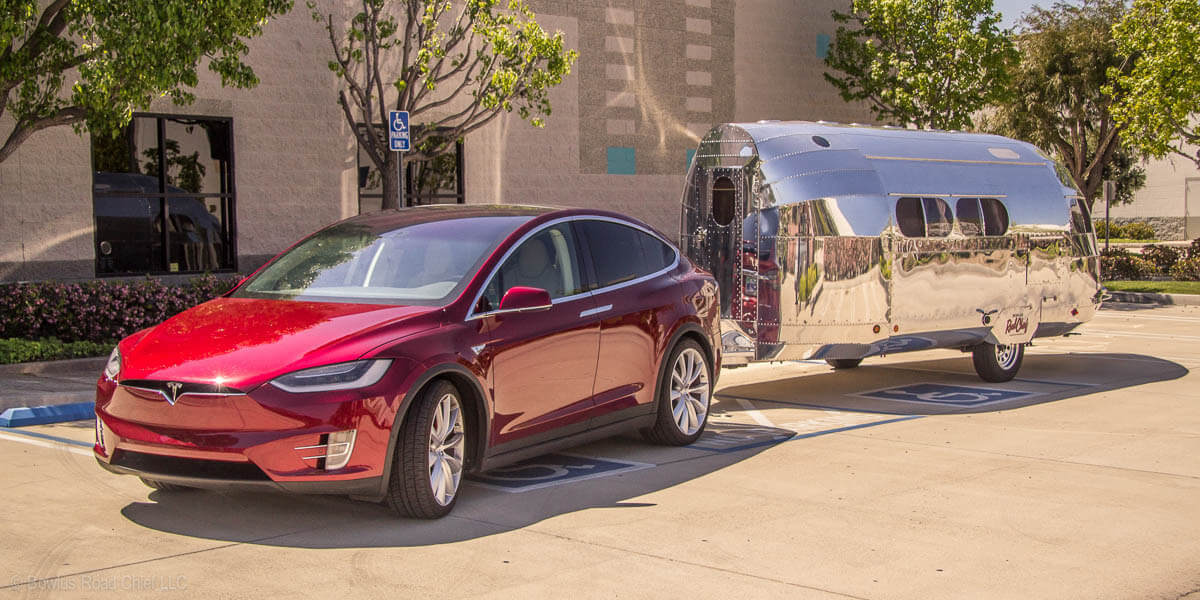 Everything about the Road Chief is designed to make travel easier. That’s why our EV owners report no discernible effect on handling when towing a Bowlus Road Chief. That being said, it’s important to know that range is affected by weather, terrain speed, elevation gains and the weight of what you are towing! Our owners have a lot to say about gauging conditions.

For instance, one owner of a 90D recommends beginning each day of traveling about five miles per hour under the speed limit on surface routes and 62 mph on highways. Twenty or thirty minutes in, you’ll have a good idea of the day’s consumption based on the weather and terrain. That owner found that under 500 Wh/mi speed could comfortably be matched to the speed limit. However, if the Tesla was over 600 Wh/mi, the owner would consider slowing down unless the next charging destination was less than 100 miles.

In contrast, another owner with a Tesla X P100D wrote that when towing his Bowlus Road Chief, he could “get to 60 mph in about 5 seconds and enjoy long step mountain passes as fast as the car in front of me with the air-condition running full blast in 110 degree heat.” He added that he had no worry "about overheating or power throttling.”

One owner drove to Idaho for a solar eclipse and reported that trading up for the Tesla X P100D made for an entirely different and improved driving experience. He stated, “Wow! I can drive 65 mph, go anywhere and pass other vehicles on uphill grades!” Another owner suggested the best way to determine how many miles to charge for a given trip was to double the actual distance and add or subtract 12 miles per 1000’ difference between the starting and ending elevation.

Fortunately, gauging Wh/mi like this is only necessary for the first few trips. After several hundred miles of towing, your Tesla’s trip planner will learn the characteristics of the Bowlus Road Chief and can be used to reliably estimate range. (However, remember that headwinds and cold temperatures have a negative impact on range and your EV can’t account for that.)

Zero emission camping is an environmentally-friendly way of enjoying the outdoors. Here are just a few testimonials from our owners about their zero emission experience:

“It was very comfortable living in it for a month with three large dogs.”

“There are less expensive trailers out there. However, it’s a lot harder to get around and not nearly as much fun! I think that existing Bowlus Road Chief Owners should consider getting a Tesla X.”

“Although the Road Chief may be smaller than other RVs you might be considering, it is laid out incredibly well.”

For those who own an electric vehicle and are looking for a tow vehicle, you’ve met your match. For Road Chief owners thinking about purchasing a electric vehicle, we appreciate you wanting to look after the natural world. With the Bowlus Road Chief, the zero emission experience is not only good for the earth, but good for you. With modern luxuries like heated floors, endless hot water and a lithium iron phosphate battery that lets you stay up to a week off grid, you can adventure on your terms.